With me today is former US Army Officer Jeff DeMarco, who early in life got his kicks playing football until he joined the military and turned to blowing stuff up with very expensive rockets. Eventually he found that writing could fuel his excitement for life when he wrote his post apocalyptic novel, Into Armageddon, the first in his Ruler of Ashes series.

Thank you for joining me Jeff. Football, rockets and writing! I have to know more! Can you fill in some of the gaps from the beginning?

Oh boy… well I started out as a baby. Raised in Troy Michigan, I played football mostly and slept through class. I attended University in Ohio on a football scholarship, transferred to Taylor University in Indiana on another scholarship, I had a career ending knee injury and transferred to Wayne State University in the get-shot area of Detroit. From there and lacking any sort of organisational assimilation, I had to develop an actual personality. An odd thing to be doing in Detroit. (Single gunshots = ok. Automatic weapon fire = run. I could write a memoir about those years in the “D” but I’ll move on.) 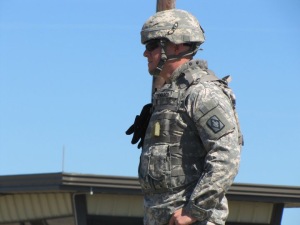 I graduated with a degree in criminal justice and lacking any motivation to become a police officer, I went to the US Army officer candidate school and earned a commission as a 2nd lieutenant. I started out as a firing battery platoon leader in a M270A1 Multiple Launch Rocket System battery. After, I worked my way into an executive officer spot, then into a staff position as a battle captain – where my professional writing career really began. I created techniques and documents that I expect are used today. Pretty proud of that. Also, blowing things up is fun.

After resigning my commission, I started at Vestas as a quality technician, building wind turbine blades in Colorado (which was awesome… I loved it out there; I call that year and a half a ‘long vacation’). Then I moved to a production supervisor role at a milk processing plant in Michigan (to be closer to family). During that time I met my wife (a doctor of nurse practitioning). Less important, I started writing my novel Into Armageddon at that time. Once my daughter Stella was born (and because my wife makes way more money than me), I quit, started a technical writing business and finished my book. That about brings us up to today.

Can you tell me about how you write?

In either my man-cave or ‘my spot’ on the couch, I start out with a few glasses of Jameson on the rocks and… totally kidding. I seldom drink. If the military has taught me anything, it’s this: don’t make excuses and get your ass to work. I usually just sit down and am either outlining, writing, editing or some marketing related activity. I write in MS Word or longhand on a legal pad. I outline in MS Excel and storyboard in MS PowerPoint (it’s an army officer thing I guess, but I’m comfortable with it.) Once I outline everything and figure out ‘what’ I’m writing and develop a scene index (I do this maybe 5 times per novel, adjusting the overall direction of the book). Once that’s done, I’m a pantser and go crazy writing each scene in all sorts of outlandish ways. I love it when I can write a scene that requires minimal editing, works perfect in context to the whole story and gives me the tinglies just thinking about it.

What are your biggest writing challenges?

What do you do when you’re not writing?

I live in Lexington, MI, about 1/4 mile from Lake Huron and I spend most of my downtime with my family. We live out on a wood lot up in the thumb of Michigan and we try to get out as much as possible – riding bikes (the pedal kind), bonfires, injuring myself on the trampoline, fishing. I regularly make terrible dad jokes that my step kids secretly find hilarious (though they’d never admit to that).

Tell me a bit about Into Armageddon.

Into Armageddon is the beginning of a dystopian post apocalyptic world, includes elements of Military Fiction, Science Fiction, hard science and genetic engineering, but reads like an action / adventure and romance all wrapped up into one pulse pounding novel that you won’t want to put down. It’s the first book in the Ruler of Ashes series.

The Order, a mysterious and powerful organisation, has infiltrated the U.S. government at the highest levels, bent on remaking humanity in its image. Deep in their underground genetics facility, they’ve created a new race of enhanced humans, among other deadly creations.

As an infant, Erica escaped the facility, but will she ever be able to escape her fate? In hiding for over 15 years, she’s been hunted. Her desire, to live free and in peace.

Now the world has changed. A viral outbreak manufactured by The Order, human apex predators roam freely, humanity has bound together in pockets of resistance. The children of The Order have turned on their masters in a race for supremacy; spread out across the country, systematically taking over key military installations.

Though not entirely human, Erica may hold the key to humanity’s survival. Will she run, as she always has? Will she stand, one against many and risk losing all she holds dear – Her freedom, her family, her very existence? 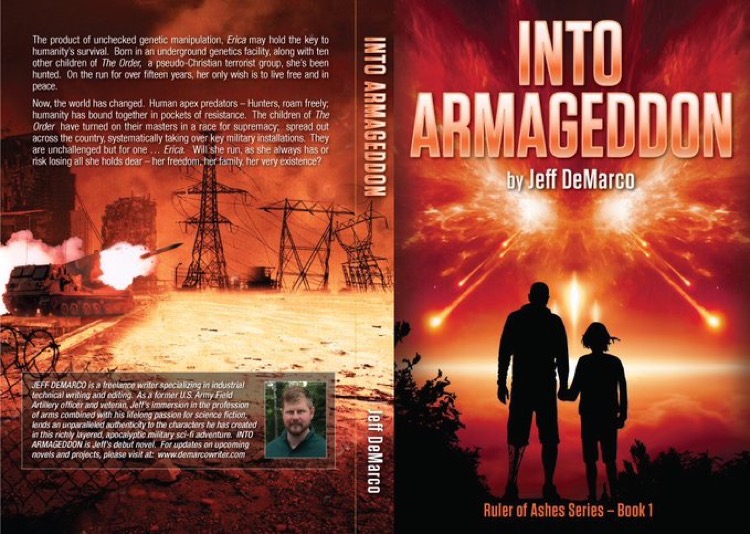 Why did you choose this genre?

Based on my interests and experiences. Most of my settings are on military installations – places I’ve actually been or know a lot about. I wanted to do something with god-like, yet flawed beings (The children of The Order), something with a bit of a horror flair (The Hunters) and something with a subversive religiously driven government organisation (The Order). Add in a theme of morality and the story really came together organically.

What sort of research did you do for the book?

My last 9-5 job was as a quality assurance manager. One of my lab technicians was a no-kidding PhD of cancer research. Most of my knowledge of genetics came from him. Medical knowledge – my wife. Military tactics and procedures – personal experience. Any blanks I had to fill in, came straight from google.

What would you say was the biggest challenge after you were happy with the words on the page?

Figuring out how to market it. What to spend time doing and what was a waste of time. I spend most of my time on twitter (@demarcowriter) and Facebook. I’m the founder of #WolfPackAuthors – a cross promotional group of 25 indie authors that help promote one another. #WolfPackAuthors is also working in cooperation with Indies United Publishing House indiesunited.net and Fauph Talk Fiction Fauphtalkfiction.com. It’s going ok. My book peaked around rank 14,000 on Amazon with paid ads. Since pulling those, I usually peak around rank 50,000

I find social media slightly addictive, but the more active I am posting and retweeting, the more exposure and followers I gain. It’s a bit of a balancing act and I have to turn the social media off for most of the day.

Well thank you Jeff for taking time to tell me your story. It just leaves me to wish you every luck in your writing career and with Into Armageddon, which you can buy now from Amazon, and the second in the series, Born of Chaos, Ruler of Ashes series Book 2, comes come out in 2 months.

If you enjoyed this interview then why not follow my blog where I’ll be posting more interviews soon and I regularly provide an insight into my own experiences as I work towards publishing my debut novel, In The End. If you’re an author, or you’re int he industry and you’ve got an interesting story to tell and you’d like to be interviewed, just drop me a line, contact@gjstevens.com