Today I’m talking to multi-genre author Andrew C Piazza to discover what hides behind the amazing cover of his “Band Of Brothers” meets Stephen King novel, One Last Gasp.

Can you start by telling me about your writing process?

I’ve been writing off and on for about twenty years. Ouch… has it been so long? May be longer, my mother once told me that my first favourite toy as a child was a set of magnetic letters that one could stick to the refrigerator.

When I’m not working (I still have one of those pesky day jobs), reading or exercising I’m usually writing in a coffee shop, sometimes at home. I find it’s helpful to have a little… just a little… activity going on around me while I write. I’m either too busy or too lazy to learn another platform so I just use Microsoft Word to get the words on the page.

Do you have any rituals to get the creativity flowing?

I used to sacrifice a live chicken, but the neighbours kept complaining. In all seriousness, I often find that going for a long walk gets my mind in the right place to write.

What level of planning do you go into?

I plan out quite a bit, especially action sequences. For those, I’ll often draw out little maps to keep track of where everything and everyone is, which I find allows me to write action scenes that are easier for the reader to follow. This can be a real challenge; unlike movies, where the viewer can more easily follow action visually, it’s not always easy to describe action scenes in such a way that the reader can “see” it in their mind and follow who is where and doing what. My terribly crude little sketches help me to keep track of everything more clearly so that I might describe the scene more clearly.

Everyone is going to tell you to write. And read. I’ll tell you something that usually isn’t mentioned… editing. If you want to improve your writing skills, you have to not only practice by writing, you must also practice by editing, especially line editing. It’s not enough to simply repeat a skill to improve it… you may just reinforce bad habits. One must pay attention and focus on the practice, examine it for flaws, iron out the rough spots.

It’s the tedious, monotonous work of going over your prose, again and again and again, until you’re ready to puke, and then… you go over it yet again. And every time, you ask yourself, how can I make this better? More concise? More clear? More emotionally evocative?  Nobody likes doing it, and it’s time consuming, and that’s why so few writers do enough of it, and why they don’t ever truly develop their skills as a writer. By constantly reviewing and editing your work, you will find your prose becoming stronger and stronger, and with it, the connection to your reader will become stronger as well.

Can you tell me about your novel One Last Gasp?

It’s a horror novel set during WWII. More specifically, it’s one half war story, one half Lovecraftian horror story.  It started off as an experiment to see if I could mash up the two genres; happily, it was a perfect match.  The existential terror underlying Lovecraft’s style of horror fits perfectly with the harsh realities revealed by war.

What sort of research did you need for the novel?

Pretty extensive, but luckily, I am a bit of a WWII history addict, so I basically had an excuse to feed my addiction. I now have an entire shelf of books with titles like “Encyclopaedia of Weapons Of World War II” and “US Army Handbook 1939-1945”. The research was extremely useful to writing the book; I discovered all kinds of interesting historical tidbits to include in the novel. For example, there was a medication used on the front lines to treat PTSD (back then, they just called it “shell shock”) called “Blue 88s”. Blue, because that was the colour of the pill. 88s, because that was the most feared artillery piece in the German arsenal… the 88 millimetre. It was a hypnotic drug that they gave to soldiers who broke down mentally under the strain of combat. They would then try to re-create the trauma of combat while the soldier was under the influence, in order to try to provoke a cathartic release, which the psychiatric profession was really keen on in those days. It ended up being more torture than treatment. I was fascinated by this little slice of history and developed a chapter around the use of this drug. The soldier given the drug doesn’t want to recall the unpleasant memories. “Please don’t make me see,” he keeps saying, which is how the narrator of the novel feels about people who keep asking him about his experiences in the war. He doesn’t want to re-live it. He wants the wounds to simply scar over and remain forgotten. It formed a nice parallel.

What was the biggest challenge self publishing the book?

Marketing the work has definitely been (and continues to be) the biggest challenge, finding a market for a war story/horror story mashup isn’t particularly straightforward. Marketing is fairly miserable, and ends up pulling my mind out of the writing zone. I could definitely live without that part of it. One Last Gasp didn’t have much in the way of sales for quite a while, until I figured out a greatly improved cover design. 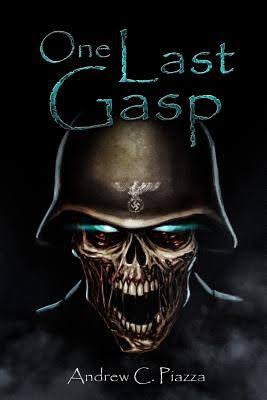 I love the cover of One Last Gasp. How involved were you in its creation?

Very. The previous cover was…. Okay, the only word is “dreadful”. I finally sat myself down and spent several days looking through various imagery and thinking about cover design. The best advice I can give is this: remember that the cover’s purpose is to A) catch people’s attention and B) signal to the viewer as quickly as possible the genre of your work. That’s it. Don’t try to tell the whole story in an image. Make it as simple as possible. The image of a Nazi zombie with glowing eyes seemed to convey the spirit of the book most easily. It is definitely NOT a book about Nazi zombies, although both Nazis and reanimated corpses do play a role in the book (mild spoilers, nothing to worry about).  However, the image of the Nazi zombie does signal immediately to the reader that this is a horror novel and a WWII novel. They can then get more details from the blurb on the Amazon sales page.

It’s a shame the cliche about not judging a book by it’s cover isn’t true. I scoured the internet and found a copy of the original cover. There is no question the current cover is light years better.

It looked a little creepy, but did nothing to either capture attention or properly signal the genre or flavour of the novel.  Yeah, it was crap.

It’s interesting to read the feedback I’ve gotten on the cover.  The vast majority love it, but a scattered few have mentioned they were actually turned off a little by it or found it “juvenile”. I appreciate everyone’s feedback.  However, a writer should always remember that they can’t please everyone. This is actually an important point about the cover as well.  You should not only seek to draw in the right audience… you should also chase off the wrong audience. If someone is looking for a fluffy romance novel… well, One Last Gasp isn’t that.  So the cover should scare those folks away.

I found you through an ad on my Facebook feed. Can you tell me about how successful this has been for turning interest into sales and do you have any hints and tips on how to make the most of this type of advertising?

Once my cover and blurb were sorted out, I mostly used AMS [Amazon Marketing Services] and Facebook ads to spread the word.  I continue to use those platforms.  I tried out Bookbub ads without good results; I found them to be very expensive without much in the way of results. I also created a Facebook author page, which I have been using to keep in contact with fans. At some point, I really need to break down and start an email list. As far as Facebook ads go, the best advice I can give is to keep testing and try to not lose your patience.  Facebook ads are extremely fickle and the costs can swing wildly day by day.  I’ve had ads go from 15 cents a click up over 35 cents a click in a matter of five days.  I track my results on a spreadsheet including CPC, number of clicks, ROI, and other such related metrics. It’s the only way to be sure you’re not losing money (which, some days, you will).

Can you tell me what you’re working on now?

I’m currently slogging away on narrating One Last Gasp into audiobook format. I decided to do it myself, because I think many people would prefer to hear a book narrated by the author themselves rather than a voice actor. It’s a lot more work, and going more slowly, than I anticipated! I’m just getting started. I picked up a high quality microphone and am recording and doing basic editing using Audacity. Once that’s done, I will probably have to get a sound engineer to master the audio to make it ready for Audible. Beyond that… I’m going to find out!

Thank you Andrew for taking time out of your schedule to talk to me. I hope you can keep in touch and let us know how you get on with the audiobook production, I know I would love to hear if it’s feasible as a DIY project. In the meantime One Last Gasp is available to buy in paperback or Kindle from Amazon now and you can connect with Andrew through his facebook page and his website http://www.andrewpiazza.com.

If you enjoyed this interview then why not follow my blog where I’ll be posting more interviews soon. I regularly provide an insight into my own experiences as I work towards publishing my debut novel, In The End. If you’re an author, or work in the industry and you’ve got an interesting story to tell, drop me a line on contact@gjstevens.com