As part of my Bug Out Bag series, today I’m testing another item key item of kit in my bug out bag, the camping stove.

During years of hiking and camping I’ve used the Trangia Camping Stove together with methylated spirits for all my cooking needs, so I assumed it would be an essential addition to the bug out bag. However I always knew the key fault would be its reliance on a supply of liquid fuel. The fuel is heavy and would be difficult to source refills in an emergency situation. So inspired by a comment on a previous post, thank you thejohnhoman, I decided to look for a multi-fuel stove as another option.

After some research I opted to test the Wolfyok Outdoor Camp Stove with the MSR Alpine Stowaway Pot as an alternative to the Trangia.

The Wolfyok Outdoor Camp Stove can be used with either solid alcohol fuel tablets or burning firewood, or anything combustable. You simply stack the stainless steel components in different configurations in order to use the different fuels.

With a concrete slab placed on my decking, I set up the two stoves side by side and put them through their paces.

But first a chance to learn from my stupidity

Before we dive into the results I want to issue a bit of a warning. Using the alcohol dish I thought it would be a great idea to put both stoves to the test on liquid fuel, so I poured the spirits into the metal dish, lit it with one strike of the flint and steel and only then thought about how I could put out the flame once I’d finished.

The Trangia comes with a cap which you drop on top of the burner when you’re done. It’s very safe and lets you save the unburnt fuel for next time. This is not so for the Wolfyok. Why was this you ask? I soon found out it was because it is not intended for use with liquid fuel. Once I’d compared the speed of boiling water on the same fuel, both comparing well, the Wolfyok only being a minute behind the Trangia, I decided it would be a great idea to drop a small lump of wood on top of the alcohol dish to extinguish the flame, an improvised version of the Trangia’s cap.

Looking back now I know it was a dumb thing to do, but at the time it seemed quite reasonable until the dish toppled, spilling the meths all over the cooker and the concrete slab (I was thankful for my forethought on that one!). I had to just leave the near invisible flame to burnt itself out, which it did in less than thirty seconds. Phew. I won’t be doing that again. Needless to say I won’t be included that test in the results below!

Okay, so now down to the results, split down by what I consider are the key aspects of performance in the context of an emergency bug out bag.

We all want a light bug out bag, right?

Much like the Trangia, all the components of the Wolfyok can be folded down to fit snuggly inside the MSR Alpine Stowaway 775ml pot, along with a single 80g pack of solidified alcohol tablets. The Trangia with no fuel is heavier by 100 grams / 3.5 ounces and larger when all packed down, taking up valuable space in the bag.

Let’s hope we don’t need it, so spend as little as you can.

Speed and hassle for unpacking, setting up and deconstructing where you’re ready to move on.

Let’s call this one a tie. Both are simple to set up and deconstruct in no time at all.

Getting the flame burning with a flint & steel

The Trangia is very simple to light. One or two strikes is all it needs. 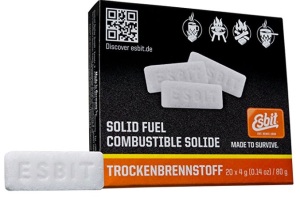 Wolfyok (Using Solid Alcohol Tablets) – With no luck lighting the alcohol with the flint and steel directly, I used lessons learnt from my recent post about fire in the wilderness and with a pinch of cotton wool taken from the kit, it lit with no hassle

Wolfyok (Using with Wood / Twigs) – Okay, so here’s when the fun really started. I knew this would not be the simplest operation.

First I gathered dried twigs and set them in the burner around a ball of screwed up newspaper. I added kindling from my kindling block and then a pinch of cotton wool.

Strike one. Strike two. I had a flame, but it was going to take a bit more patience to light. So instead I put a single block of solid alcohol tab (half would probably have done) on top of the pile of wood and paper, then a pinch more of cotton wool and on the first strike it lit. Boom. Off it went. It was very smokey at first, but after a minute or so the flames roared and the smoke cleared.

This test looks at how long it takes for each stove to boil the same quantity of water and secondly, how much fuel was used in the process, an important consideration if you need to carry the fuel with you.

Trangia – 6 mins and when done the fuel can be easily extinguished for later use. Total weight of fuel to boil in the kettle – 10g – Bottle standard fuel bottle has 500 grams – so could boil 50 times on one bottle.

Wolfyok (Solid Alcohol mode) – 8 minutes and having burnt through three tabs (12g), the water was just hot. I estimate it would take double the amount of tabs to boil (24g). For the same weight as the liquid fuel you would be able to boil water 21 times with the solid fuel.

Wolfyok (Wood burning mode) – with only one alcohol tab required (4g) and probably able to get away with 2g, the rest of the fuel would just need to be scavenged. Time to boil was 7 minutes. If you wanted to put the fire out before it burnt out by itself, you would need to use water, which if you weren’t next to a plentiful source then it could cost you dear. For the same weight of fuel you would get 250 uses.

Using a fifth of weight of imported fuel plus it could still light it but would just be more time consuming.

The results are in. In a survival situation the Wolfyok is the clear winner. It’s lighter, smaller, consumes less imported fuel and can be used without any need foe fuel which cannot be scavenged if needed. This means your pack will either be lighter so you can travel further, run away faster or use less energy, or have more space for other important items. Plus it’s considerably less expensive and you won’t feel quite so bad at leaving it inside your bug out bag, hopefully never having to use it.

The Trangia, although it is easier to use, which is great for camping and convenience, it’s  out of the bug out bag and the Wolfyok with MSR pot is in!

I haven’t updated the kit bug out bag contents yet as I’m planning a big update in the coming weeks after a load of testing posts you’ll see soon.

In the End…Why not read about what happens to

a group of friends whose world collapses around them, forcing them to make difficult decisions just to stay alive. It’s not going to be comfortable, or an easy ride. Find out if they’ve got what it takes to survive when they’re no longer at the top of the food chain…

Here’s Season One to get you started!