The latest version of this post is available here.

I’m about to embark into the unknown world of self-publishing my first book, In The End. Here I document my honest journey so far and the steps I think I’ll need to take. I’ll repost each time I have any major update or when I learn something new or if anyone comments with some useful or important information.

This is the third update after a week of activity on the project. I had tried to show all updates in a different colour, but it doesn’t come out when publishing!

A thank you to the community

Each time I post an update I get more and more insight from the WordPress Community. So I’m going to keep doing it. Thanks Guys!!!

Build a following. Build a community. 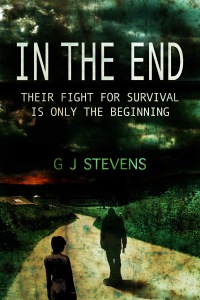 Under my own rules of how I wanted this work to develop, they’ll be no development editing of the work. It’s done! Now I need to get the work polished and hunt out those pesky typos, or mistakes as a good friend calls them! It’s the area I’m weakest at so I have to rely on my wife to do it for me and she’s a busy lady so I’m trying to be patient.

I’ve also decided to look through the work again myself and I’m glad I did. Although I’m not breaking my own rule set out above, I am changing more of the words and phrases than I thought I would have too. The edit is now completed

I’m revisiting the subject of development editing again. I’ve had some feedback, one comment on my previous update, about the work benefiting from a development edit to get some of the sentence structure until control and I won’t lie, I’m torn. I guess this is a question of my motivation. This has never been about money, making it or spending it. I know only 20% of authors actually make a living out of writing and that’s not going to be me. I have a good full time job and I’m not looking to replace it. I write because I enjoy creating worlds and telling the story then soaking up my reader’s reactions. Publishing for me is all about getting the work out to a wider audience and hoping more people like it than don’t.

The question is would a development edit turn the work into something else, would spending £800-£1,000 turn this into a money pit whereby I need it to be a success so I’m not just throwing good money away.

However if I don’t get it edited and it ruins people’s enjoyment, can I handle the criticism, the bad reviews? What would that do to my writing confidence when the work is out in the big wide world for anyone to read and tell me exactly what they think about it?

I need to think on!

Had a comment from one of my first readers over the weekend and he spotted a section early on in the book which jarred with him. I totally agree with what he said, but it was an easy fix. I’d rather hear it from him than a reviewer!

I’ve also made a tweak to a reoccurring sentence throughout the book, it also happens to be the opening line and I’m pretty happy with it. As part of the publishing process, mainly running through the MS Word grammar suggestions (once I switched it from US English) I made a few more updates.

Figure out how the hell I’m going to get this published on Amazon. I want to publish as an e-book and also use Amazon’s print-on-demand service. CreateSpace. So I’ve bought the top selling books on the subject from Amazon which the reviews seem to think will guide me through the process! Lots and lots to learn here, so much more information to be added.

It seems that using an Amazon Print on Demand services was the right choice from what I’ve read so far and much easier to format the work this way and then publish for Kindle. Plus it’s free to get your book on the shelves and if you want a copy it only costs the price of the book through the Amazon store. However I’d assumed I’d be using CreateSpace, but during my research I discovered KDP (Kindle Direct Publishing). This is also a service from Amazon and from what I’ve read it seems a newer and improved service, with benefits to those authors outside of the UK. This calls for more research!

KDP vs CreateSpace – The advice is clear – KDP is the emerging technology which almost provides the same service as CreateSpace, plus it has the added advantages of providing one log-in for Kindle and POD sales, plus author proof copies are posted from the UK which keeps the costs down and the timescales low. I’ve signed up to KDP, so I guess the journey begins here and I’m logging all the steps in preparation for the possible future post.

It seems I may be missing out if I just publish on Amazon. I need to look at other publishing outlets and using a platform called Smashwords seems to be the way to go. You just publish to the Smashwords platform and they do all the rest. I’ve had a look at the service and it seems reasonable and again is free. They have their own style guide which I need to read and in conjunction with any similar guide I’m assuming Amazon has to, which I’ll get on to later. Many thanks for the comments on my last update post which led me down this avenue!

I’ve started to read through the publishing books and straight away new tasks are popping out:

Other publishing things to think about:

Continue to build the community and market the book. Lots to learn here. So far my marketing strategy consists of:

Other decisions to make:

I’ll take Season One off WordPress and add in my own advertising to link to the book on Amazon. Lots more to learn here.

In parallel with all the above I’ll be doing the same for Season Two and writing Season Three. I’ve made a decision not to start working on Season Three until the book is released and I can put all my energy back in to writing again. I’m getting itchy fiction fingers, so I might have to write some short stories and use them as promotional material.

Want to read Season One before I take it down? Here it is.

If I’ve made some massive misjudgement, missed out any step or you just have some advice, then please let me know in the comments.

What if you woke to find the electricity off, the internet down and the streets deserted? What if you were forced to run for your life, no longer top of the food chain? What if the government had no interest in keeping you alive, but you’d found a reason to struggle on, a new meaning to this life, those around every corner intent on hunting you down?

Could you survive the end of civilisation?

Meet Logan. That’s me. The first to believe the world had changed forever. The first to urge our friends to run. The first to kill, but not the first victim. I was the first to see for myself as nature bent before my eyes. With death surrounding, getting ever closer, they looked to me for answers.

This is my story.